The Record » features » From Amish baker to Goshen graduate

An article done on Naomi Kramer, one of the founders of ADSFund.

The Record » features » From Amish baker to Goshen graduate

From Amish baker to Goshen graduate 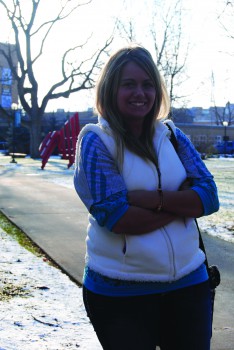 Only eight years ago, Naomi Kramer was living in an Amish community located in Jamesport, Mo., where she worked in a bakery and did chores at home without the aid of electricity. Today, she drives a 2007 Mitsubishi Eclipse and spends more time in science labs than cleaning her house. Kramer is 26 years old and set to graduate next year with a nursing degree from Goshen College.

Kramer described her old Amish life as “peaceful” and “slow-paced.” She washed clothes with a gasoline-powered ringer washing machine and, in the absence of television, spent her free time reading the Little House books by Laura Ingalls Wilder. “Our parents were always very careful in screening what we read,” she said.

At 19, Kramer began to have doubts about whether a simple, Amish life was for her. “Everyone else was getting married and thinking about having a family, but I didn’t think I wanted that right away,” she said. “I wanted to travel and see what’s out there.”

A deeper reason for Kramer’s departure, however, was her lifelong dream of becoming a nurse. “My siblings and friends always liked playing doctor and nurse growing up,” she said, laughing. More seriously, Kramer said that she was often tasked with taking care of her four siblings. “Because my mom was always busy, I helped raise my younger siblings, and I always had a motherly desire to take care of them,” she said. Eventually, Kramer’s dream of becoming a nurse meant leaving her old life behind.

So she set out from Missouri to Florida on her own to study nursing at Manatee Community College—now State College of Florida. While living there, Kramer underwent what she described as a kind of culture shock.

“When I arrived in Florida,” Kramer said, “I had no idea how different my culture was.” Hardest of all was being on her own for the first time. “In Amish culture, we have a very high sense of belonging,” she said. “You are a community. If something happens, people are always there to protect you or help you.”

Initially, Kramer wore Amish dress and didn’t use all available forms of technology, but without her family she quickly stopped these practices.

“At first I would have to explain to people that I was Amish and needed help doing basic things like writing emails,” she said. “They’d always look at me like I was from another planet, and no one seemed to know who the Amish were.”

Kramer also said that the different pace of life took some getting used to. “Everything is much more fast-paced, and you have a lot of pressure in how you dress,” she said. “I tell people that if I ever go back, it’s for a slower pace of life.”

In 2008, three years after moving to Florida, Kramer decided it was time for a change. “I figured if I transferred to a Mennonite college or moved back into my community, I might feel a little more comfortable,” she said.

Kramer found Goshen College by doing an Internet search for colleges in the Goshen or Nappanee area. “I think Goshen College came up immediately, and I began applying shortly after that,” she said.

Kramer said that Goshen College has been much more accepting and understanding of her background than the State College of Florida was. “Because this is a Mennonite community, people here tend to at least have an idea as to where I’m coming from,”she said.

Kramer is only able to go back home “about two or three times a year.” It’s during these visits when she is able to see her childhood friends, who she said, “are all Amish, married, and have a row of kids.” In contrast, Kramer lives on her own and says she’ll have plenty of time for marriage later in life.

Though Kramer is happy with this new life, she was quick to say that she missed her Amish home. “I don’t think I could go back, but I really do miss it,” she said, pausing for a moment and adding, “a lot.” She said, reluctantly, that the biggest factor keeping her from home was the prospect of giving up some of the luxuries of a non-Amish lifestyle. “Giving up my car, my cell phone, all of that would be really hard,” she said. “I honestly can’t think of a reason for not going home bigger than that.”

When Kramer does visit for Amish weddings and other celebrations, she often gets “a lonely feeling,” since she knows it will never be the same again. She is set to fulfill her lifelong dream of becoming a nurse—a dream that has come at a price larger than even her tuition bill. Kramer said everyone in Amish communities must eventually decide whether they will stay home or make a life elsewhere. “It’s a really hard choice,” she said.

Posted in ADSFund in the News